Friends, I’ve already discussed the “Blood Moon” craze in detail in previous newsletters, along with my skepticism.  These articles are archived as follows….

If you haven’t already done so, you might want to read those commentaries, since they are not repeated here in this newsletter.

The Rationale for Classical Astronomy
For those of you who are new to Classical Astronomy, my simple purpose is to help people to learn and understand the amazing clockwork that the LORD has placed over our heads.  Our generation is unaccustomed to going outside to observe the sky.  Instead, the main focus in popular astronomy is on “space” — NASA and PBS programs and the like, an indoor activity.  But long ago, it was common for our ancestors to read the almanacks and observe the sky, to tell time from the Sun and Moon, and to marvel in the LORD’s glories above.

This is not anyone’s fault, because a basic understanding of Classical Astronomy is omitted from the schools and absent from the media and the pop culture.  We’re all in the same boat!  In our generation, the night sky is “Terra Incognita,” and most people are completely unaware of what lies above eye level.  So I’m simply doing my own little part to help people to discover the LORD’s sky, and to observe the beauty and the wonder of the heavens that “declare the glory of God” (Psalm 19:1).

That being said, it seems like astronomy is a lightning rod for topics that have nothing to do with the simple observation of the sky.  I am constantly asked to explain and/or express an opinion on topics such as Biblical geocentricity, young-earth vs. old-earth creationism, the Star of Bethlehem, the so-called “Gospel in the Stars,” and yes, the “Blood Moon” eschatology.  Some Christians become very contentious if I express an opinion that is counter to their own.

For this reason, I do not like to be drawn off onto such divisive tangents.  I would prefer to simply alert folks to the amazing sights that the LORD has placed over our heads, and develop an appreciation for the common, everyday wonders in the sky above.  These include the regular, monthly conjunctions (i.e. alignments) of the Moon with the bright planets, which are always amazing sights.  Other sky events can include conjunctions between two planets, such as will occur this year between Jupiter and Venus.  And yes, other events are eclipses of the Sun and Moon.

Commonplace Motions of the Celestial Bodies
I’d like to emphasize that eclipses and conjunctions of the Moon and planets are very commonplace events, and occur in the sky with great regularity.   It should be appreciated that the cycles of the Sun, Moon and planets are very precise and regular.  A high level of precision is available for calculating solar and lunar eclipses, so these events can be predicted centuries in advance with pin-point accuracy.  This is one of the triumphs of modern science.

In this way, eclipse prediction is a like a type of “scientific Calvinism.”  There are no surprises awaiting us where eclipses are concerned.  Every eclipse that any of us may ever hope to see in our lifetimes is already figured out, waiting for the time and place where they will occur.  This is especially worth considering as we approach the subject of “Blood Moons” and other celestial “signs” that are deemed to be fulfillment of Biblical prophecy.

When we see a conjunction or an eclipse, we are simply observing a concurrence of celestial bodies that align in the sky.  It is my opinion that it does not “mean” anything when two celestial bodies align, since these are simply commonplace occurrences that simply result from these bodies following the paths that the LORD has ordained for them.

Astrology – “Meaning” in the Sky
The root of astrology is the notion that there is some sort of “meaning” in a commonplace alignment of celestial bodies.  In traditional Greek pagan astrology, the Sun, Moon and planets were considered to possess some sort of properties, as did the constellations.  Astrology teaches that, when one or more celestial bodies pass through a particular constellation, there is some sort of combination or interaction of their respective properties.

In this way, according to astrology, it supposedly “means” something when celestial bodies align.  The Bible has always taught against this sort of divination from the stars, and modern science has supported Scripture, showing astrology to be nothing more than pseudo-scientific hogwash.

It is for this reason that I am highly skeptical of any “wind of doctrine” that presumes to find any sort of prophetic meaning in the constellations, or in any of the natural, regular motions of the objects in the sky, or in any of their commonplace alignments.  Such an interpretation smacks of astrology to me, and all the folly that follows therefrom. I would instead counsel anyone to spend more time outdoors observing the LORD’s creations that we see in the sky, and less time indoors pondering the meaning of them and their commonplace motions.

Natural vs. Supernatural Events
It’s worth noting that the prophetic celestial events described in Scripture are either supernatural events or at least rare, unprecedented natural events.  For example, the “great mountain burning with fire” from Revelation 8 might be construed as a meteor strike on the Earth, with the attendant destruction.

This short YouTube video debunks the “Blood Moon” eschatology currently being put forth by John Hagee.  The video mentions Mark 13:24, which states:

But in those days, after that tribulation, the sun shall be darkened, and the moon shall not give her light….

Around 1:00, the video quotes Mr. Hagee as saying:

That verse describes a time in the future when the Sun and the Moon will eclipse at the same time.

Such an event would indeed be supernatural, since it is physically impossible for the both Sun and Moon to be simultaneously eclipsed.  Solar and lunar eclipses are both caused by the position of the Moon in its orbit.  Solar eclipses occur at New Moon, when the Moon is interposed between the Earth and the Sun, so that the Moon’s shadow is cast upon the Earth.  Meanwhile, lunar eclipses occur at Full Moon, two weeks after the New Moon, when the Moon is on the opposite end of its orbit, and passes through the Earth’s shadow. 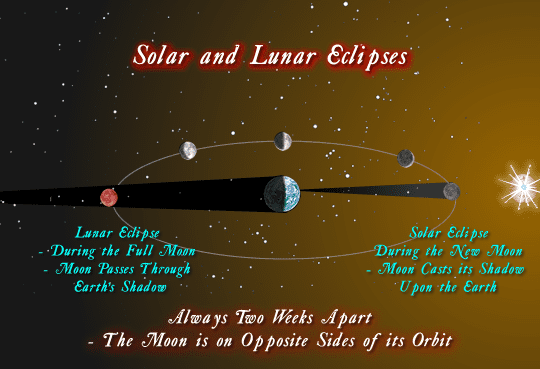 It would be physically impossible for the Sun and Moon to be eclipsed at the same time, as purported by Mr. Hagee.  Either the Moon would somehow have to be in two places at the same time, or else there would have to suddenly be two Moons!

Either way, such an occurrence would not be a trivial, commonplace eclipse in the usual sense of the word, in that eclipses are regular, predictable, natural events, as is understood by those who regularly observe the cycle of the Moon.  Rather, such a concurrent darkening of the Sun and Moon would either be supernatural, or else perhaps a one-time natural darkening of both the Sun and the Moon as history draws to a close, as the LORD’s plan for our world approaches its final culmination.

(For this same reason, the darkness that fell during the crucifixion could not have been a solar eclipse, as some speculate.  Jesus died over Passover, near the Full Moon, but a solar eclipse can only occur at the New Moon.  Plus. a solar eclipse cannot last longer than eight minutes, not the three hours described in the Gospel.)

Similar “Blood Moon” prophecies are found in Joel, and also the other Gospels, the Acts of the Apostles, and the Apocalypse, such as this verse:

And I beheld when he had opened the sixth seal, and, lo, there was a great earthquake; and the sun became black as sackcloth of hair, and the moon became as blood. – Revelation 6:12

Again, this verse describes a simultaneous darkening of the Sun to accompany the “blood” color of the Moon.  It’s worth considering that the natural causes of eclipses were well understood by Greek astronomers, centuries prior to the New Testament times.  Also, as  explained in previous newsletters, there is Scriptural evidence that the Apostle Paul was well-versed in Greek astronomy.  There is no reason to believe that anyone in the early church would have construed the “sixth seal” to be a natural event.

“Blood” Moon???
The main reason for the confusion over common lunar eclipses and momentous prophetic signs is the “bloody” coloration of the Moon during eclipse.  This also has a very ordinary, natural explanation.

An eclipse of the Moon occurs when the Moon is at a place in its orbit where it is aligned with the shadow of the Earth.  The Moon passes through the Earth’s shadow, and experiences a temporary darkening that lasts not more than about an hour and a half. 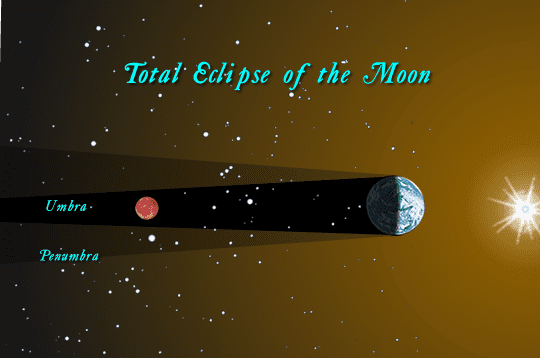 In the early stages, the Moon passes through the “penumbra” or partial shadow of the Earth.  As seen from the Moon, this would be a stage when only part of the Sun is blocked by the Earth.  The “penumbral” stage of eclipse is not very noticeable, but is only a slight darkening of the Moon while the Sun is being partly obscured.

Intuitively, it should seem that a totally-eclipsed Moon ought to be invisible, since the direct sunlight is completely cut off.  Some total lunar eclipses are indeed very dark, where only a smoky, charcoal-grey light can be seen on the Moon’s surface.  Some eclipses have the familiar “blood” color, a rusty red, while others are a bright shade of orange, barely darkened at all.  All this is the result of sunlight interacting with the Earth’s atmosphere.

We all see the familiar shades of red and orange that light up the sky around sunrise and sunset.  This is due to the scattering of sunlight in the atmosphere, which disperses the blue, green and yellow light that shines from the Sun.  The orange and red shades of sunlight are not as readily dispersed, and are transmitted through the air so that we can see those colors.  As a result, sunrises and sunsets are very colorful in the ruddy shades, a beautiful way to begin and end each day. 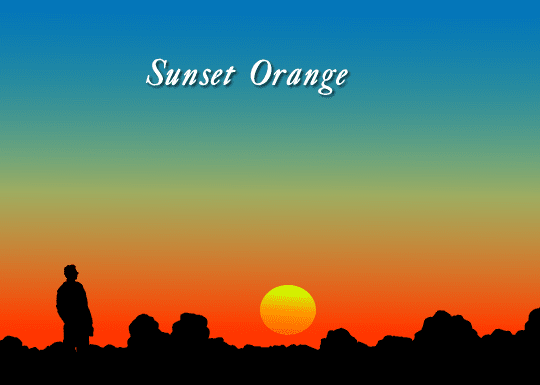 Though we are all familiar with the beautiful “sunset orange” color as seen on the ground, we are less familiar with the fact that the same colors can still be seen from out in space, far above the Earth!  Some of the reddish-orange light from the sunrise and sunset lands on the ground, but a lot of that light passes straight through the atmosphere, out into space, beyond the Earth! 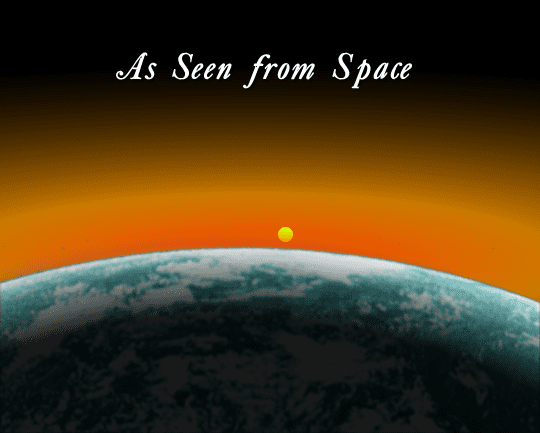 Far out in space, away from the Earth, that reddish-orange light is shining all the time, since the Sun is always shining somewhere on the Earth.  But during a total lunar eclipse, the direct sunlight is blocked from the Moon by the Earth.  Only that reddish-orange light is transmitted through the atmosphere, and is visible as a light source that shines on the Moon during an eclipse. 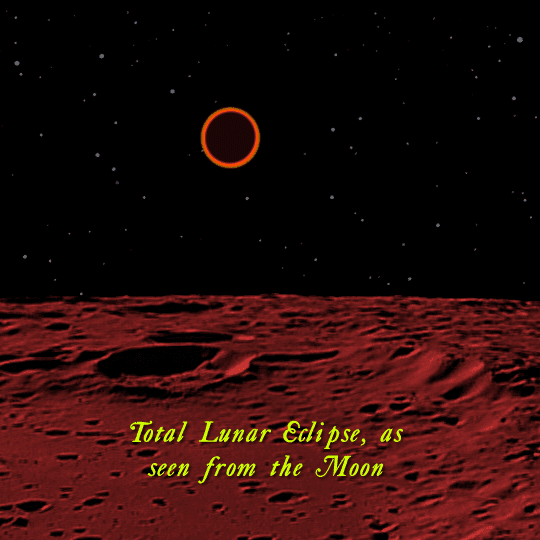 If anyone could be standing on the surface of the Moon during a total eclipse, they would see an eerie sight in the sky.  The Sun would be hidden behind the Earth, and the Earth itself would appear as a dark spot in the night, with only a reddish-orange ring of the atmosphere visible to indicate the Earth’s position in the lunar sky.

That reddish-orange ring would represent every single sunrise and sunset occurring on the Earth, and the shining ring would cast its ruddy glow onto the lunar surface, painting the Moon a “bloody” color for the duration of the total stage of eclipse.  Perhaps someday, if astronauts ever return to the Moon, someone will be standing on the Moon, and be able to relate the experience of seeing the entire lunar surface turn red as the Sun creeps behind the Earth.