The Second “Blood Moon” of the Tetrad

The lunar eclipse of October 8 has been hailed as the “second Blood Moon” of the current tetrad of lunar eclipses.  We discussed this in a previous article in which we analyzed the circumstances of this eclipse tetrad and expressed doubt as to this being a meaningful event with respect to  eschatology and Bible prophecy.   Please review that previous article for more information.

Briefly, the current tetrad of total lunar eclipses during 2014 and 2015 is deemed significant by some since they occur during the Jewish feasts of Passover and Sukkoth, or “the Feast of Tabernacles,” and previous recent instances such an eclipse tetrad purport to coincide with significant events in the history of Israel.  However, a comparison of dates shows that the related events actually occurred BEFORE the eclipses of the tetrad.  I therefore concluded that there is no precedent for seeking an upcoming significant event in the history of Israel that might occur AFTER this current eclipse tetrad, since the other events (mostly) preceded the eclipses themselves, as follows:

Timing of the Hebrew Feasts

The previous newsletter includes links to articles that explain the astronomical basis for the Hebrew feasts of Passover and Sukkoth.  In general, the Hebrew calendar is based on a lunar calendar, where the phases of the Moon are used to count days and otherwise measure time.  As can be read in those articles, Passover is timed to land on “the fourteenth day of the first month” (Lev. 23:5) and Sukkoth is timed to “the fifteenth day of the seventh month” (Lev. 23:34).  Both of these dates happen to be on or very near the Full Moon of their respective months.

Our generation is unaccustomed to observing the simple cycle of the Moon’s phases, even though it is before our eyes every night of our lives.  The Moon’s phases are very easy to understand for anyone who will consistently make observations at sundown and sunrise over the span of a month.  The Moon’s phases are so simple to understand that even little kids can learn the cycle, as is the subject of our children’s storybook, Moonfinder.  The lunar cycle is explained in greater detail in our Signs & Seasons curriculum.  Anyone wishing to better understand the Moon’s cycle should consult these books. 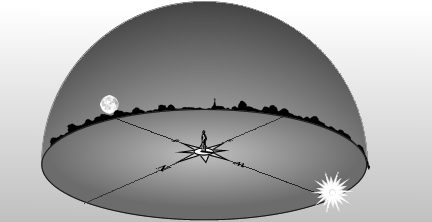 If one could have a “God’s-eye view” of the solar system, one would see the Full Moon on the opposite side of the Earth, compared to the Sun.  The Sun, Earth and Moon would roughly line up during the time of the Full Moon.

So anyway, since Passover and Sukkoth always occur at the time of the Full Moon, the Moon is always aligned on the opposite side of the Earth from the Sun during the time of these feasts.

Scripture also indicates that Passover occurs in “the first month,” which, in the Hebrew lunar calendar, is the month of Abib or Nisan, which falls around March and April of our civil calendar.  At this time, the Sun is very near to the point in the sky of the vernal equinox.  In the present century, the place of the vernal equinox is located in the constellation Pisces.  (That is to say, the Earth is at a place in its orbit where the Sun lies along the same line of sight as the constellation Pisces).   During the Hebrew month of Abib, the Full Moon appears in the opposite side of the sky from the Sun, near the place of the autumnal equinox, in the constellation Virgo.

(The equinoxes and their placements among the constellations are also explained in detail in Signs & Seasons).

Note that the Scriptures also indicate that Sukkoth occurs in “the seventh month,” which, in the Hebrew lunar calendar, is the month of Tishrei, which falls around September and October of our civil calendar, on the opposite side of the year from Passover.  At this time, the Sun is very near to the point in the sky of the autumnal equinox, in Virgo.  During the Hebrew month of Tishrei, the Full Moon appears opposite from the Sun near the place of the vernal equinox, in the constellation Pisces.  So the circumstances of the Sun and Moon among the constellations are opposite during Sukkoth compared to Passover.

The Reasons for Eclipses

A lunar eclipse occurs when the Full Moon passes through the shadow of the Earth.  This shadow crossing causes the Moon to change color, from anywhere between a pale orange color, a deep red, or a charcoal grey color, barely visible.  The reddish-orange color is due to red light being filtered through the Earth’s atmosphere, that shines on the Moon.

Before I began learning about Classical Astronomy, I always wondered why we do not have a lunar eclipse every month.  I basically understood that during the Full Moon, the Moon was “behind” the Earth, compared to the Sun.   It seemed like the Moon should pass through the Earth’s shadow every time the Moon was full. 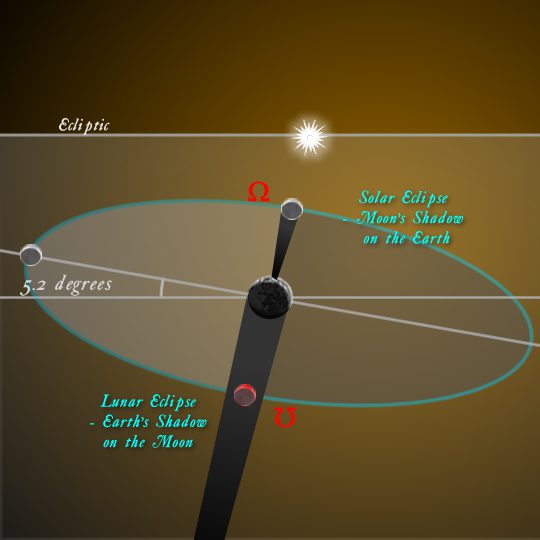 During the months when the nodes are aligned, the New Moon and Full Moon are in a straight line with the Sun and Earth.  Thus, the shadow of the New Moon passes over the Earth, and a solar eclipse can occur.  Similarly, the Full Moon passes through the Earth’s shadow, causing a lunar eclipse in which the Moon turns red.  During the other months, when the nodes are not aligned with the Sun, the New Moon’s shadow does not touch the Earth, and the Full Moon does not pass through the Earth’s shadow.  In these months, there are no eclipses. 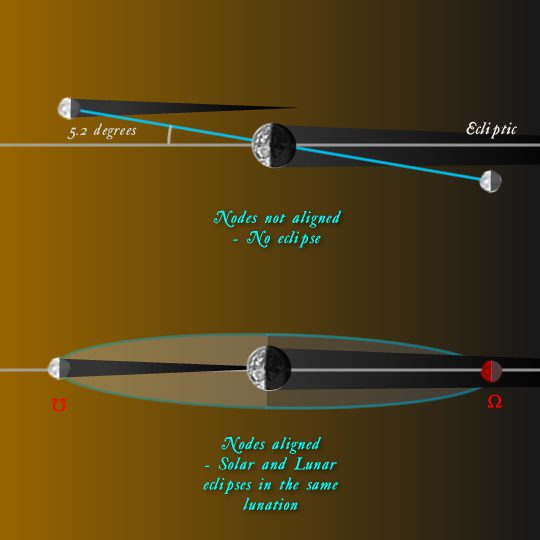 At any given time, the line connecting the Moon’s nodes is pointed in a particular general direction, so that each node appears to lie on a given point along the ecliptic.  The position of the nodes shifts slowly through the constellations, due to a complicated gravitational interaction between the Earth and the Moon. Anyway, since the Hebrew feasts of Passover and Sukkoth also occur at the Full Moon, and since they are also separated by six months, it’s not all that usual to have lunar eclipses to occur during both these feasts in the same year.  Actually, since there are twelve months in the year and twelve constellations in which the Sun and Moon can seen, lunar eclipses occur during the Hebrew feasts about every six years, on average.

For example, on April 15, 2014, during the first so-called “Blood Moon” of the current eclipse triad, the Sun was aligned with Pisces, just past the vernal equinox, and the Full Moon was passing the ascending node in Virgo, near the point of the autumnal equinox. 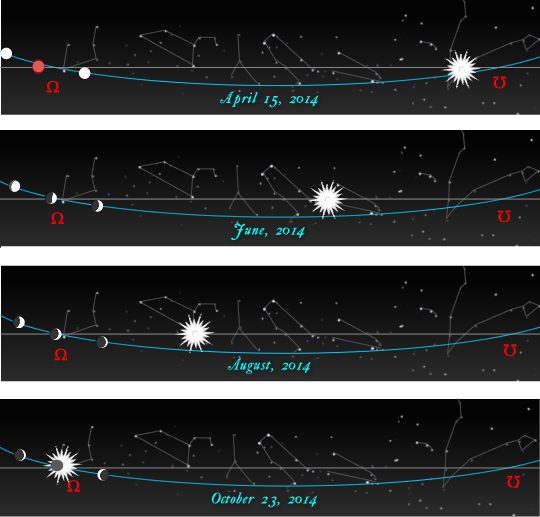 During October, 2014, the Sun itself is aligned with the stars of Virgo.  Thus, the Full Moon is opposite the Sun, at the descending node in Pisces, on October 8, for the second eclipse in the “Blood Moon” tetrad.  But when the Moon reaches the ascending node in Virgo during October, while the Sun is passing through that constellation, this results in the partial eclipse of the Sun, to be seen on October 23.

As mentioned above, the nodes do appear to move slowly to the west along the ecliptic, a phenomenon called regression of the nodes.  In this way, solar and lunar eclipses occur at different places along the ecliptic, in different months, over a span of years.  Otherwise, eclipses would always occur on the same dates every year, and there would be no variation.

The months in which the eclipses occur are different from year to year, and vary in an 18 year cycle, called a saros. But the nodes slip about 20 degrees per year, of the full 360 degrees of the circle of the ecliptic.  Since a zodiac constellation represents about 1/12 of the ecliptic circle, or 30 degrees, therefore similar eclipses occur in the same constellations for about two consecutive years.

For this reason, in 2014 and 2015, the Moon’s nodes happen to be lined up with the equinoxes, in Pisces and Virgo, and therefore coincide with Passover and Sukkoth.  However, due to the regression of the nodes, the “Blood Moon” eclipses occur at different points along the ecliptic, and therefore, on different dates from 2014 to 2015.

On April 15, 2014, during the first so-called “Blood Moon” eclipse, the Moon’s ascending node ☊ was at a celestial longitude (position on the ecliptic) of 208 degrees away from the point of the vernal equinox.  By April 4, 2015, the following Passover, the ascending node regressed to ☊ = 190 degrees, causing the eclipse to shift to the other side of Virgo, compared to the previous year. 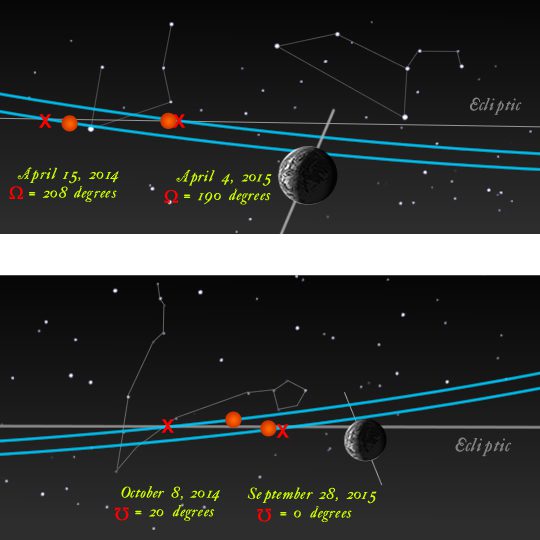 So really, there is nothing all that significant about lunar eclipses coinciding with the Jewish feasts, and certainly nothing we should regard as sufficiently momentous and apocalyptic that they should be construed as prophetic signs. Rather, these eclipses just happened to align in this manner due to a fortuitous convergence of celestial cycles, the Earth and Moon simply following their paths ordained by their Creator, which can be determined beforehand with the modern understanding of celestial mechanics.

The only reason that this convergence of eclipses with Hebrew feasts seems significant is just that few people have paid attention to this commonplace type of event prior to the “Blood Moon” hype, and the devotees of this pop doctrine are simply naive to the celestial realities that the Creator has established. I encourage everyone to learn more and google the terms and concepts discussed in this newsletter.

I realize that a lot of that was probably a lot to swallow for some readers!  Hope it helped paint a picture of what’s going on in the sky with the Sun and Moon.  Again, please feel free to ask questions.  I’ll try to give you my best answers, and will share more detailed explanations in this newsletter when the third “Blood Moon” rolls around, in another six months.