If you were reading our newsletter in the spring and summer of 2015, you read that we enjoyed a rare extended alignment of the blazingly bright planets Jupiter and Venus.  If you missed those newsletters, you can read them in the online newsletter archive.

As we frequently explain, Venus and Jupiter are the brightest “stars” visible in the sky, respectively the third and fourth brightest objects in the sky after the Sun and Moon.  And yet this is a little-known fact in today’s world.  One of my most common FAQs is “what’s that really bright star?” followed by a description of the time and direction of observation.  Invariably, the answer is always Venus or Jupiter, or occasionally Sirius, the brightest actual star in the sky.

The bright planets Venus and Jupiter were once very famous as night-sky objects throughout all history, and mentions of these bodies pervade all classic literature prior to the 20th century.  Yet at some point in the past century and a half, they vanished from popular awareness, and are mostly unknown today.  Why is this and how did it happen?  It’s one of the mysteries of our age.  Nonetheless, the fact remains that you can easily see Venus and Jupiter in the morning sky during the current season.

Venus and Jupiter had been visible in the evening sky this past spring and summer, seen among the stars of the constellation Leo.  They vanished into the Sun in July and August, since the Sun appeared to move in front of the stars of Leo.  (Actually, this is due to the changing line of sight of the Sun compared to the background constellations, due to the Earth’s annual revolution, as explained in our Signs & Seasons curriculum.)

Now these bright bodies have reappeared in the morning sky, before sunrise, as has the prominent constellation Leo.  On mornings in October, 2015, you can see the planets Venus and Jupiter in the eastern sky, among the stars of Leo.  Look to the east in the morning as the famous constellations near Orion are hanging high above the southern horizon.  Also notice that the brightest star Sirius is in the sky, along with Jupiter and Venus.

But as a special bonus in this current season, these blazing planets are also joined by the less-bright planets Mars and Mercury!  Four of the five classical planets are above the horizon together, in the same general part of the sky! 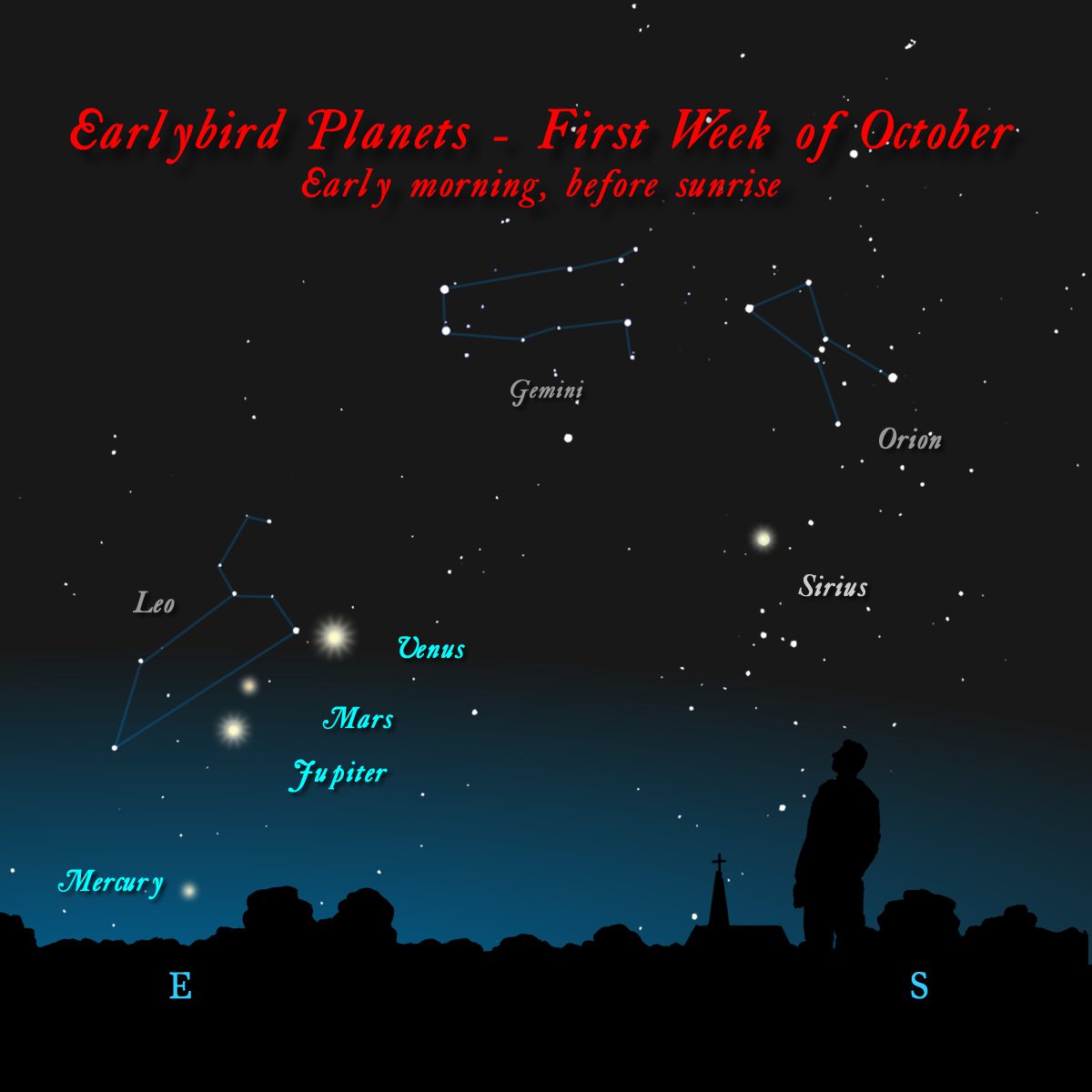 New observers to the sky are often puzzled as to why the planets are sometimes visible in the evening and at other times seen in the morning.  A detailed explanation of the planetary motions was given in the recent newsletters, and will not be repeated here in detail.  Basically, the Sun appears to move through the constellations, and the slower-moving superior planets beyond the Earth’s orbit essentially “ride along” with the constellations as the Sun moves past them.

Venus and Mercury are inferior planets, closer to the Sun than the Earth, and these planets always appear somewhere near the Sun at all times.  But when Venus is at a point in its orbit where it appears to the east of the Sun, it’s said to have an eastern elongation, and is visible in the evening sky, above the western horizon.   But when Venus moves into alignment with the Sun and emerges to the west of the Sun, it has a western elongation, and is visible in the morning sky, and appears above the eastern horizon. 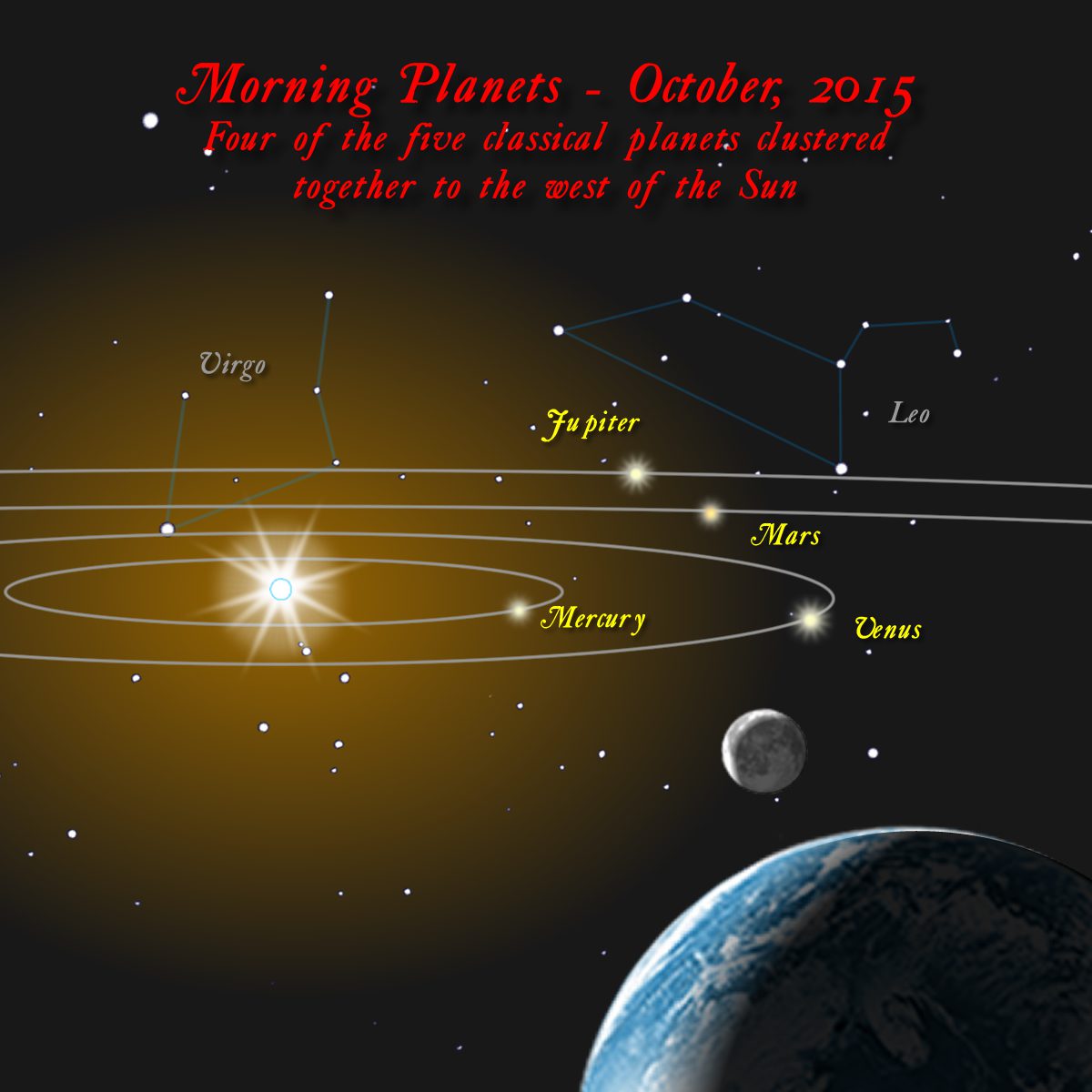 In the morning sky scene shown above, you will have no problem spotting Venus and Jupiter, with Sirius off to the far right.  Mars will be less obvious, as it is a much fainter object at the present time.  It might also be a challenge to spot the bright star Regulus in Leo or to make out the pattern of this constellation.  It may be well nigh impossible to spot Mercury, as this elusive planet is always close to the horizon even under the best of times, though the current month is the best time to look.

Celestial objects are harder to see when close to the horizon, especially under light pollution or in dawn twilight.  But it really is true that “it’s always darkest before the dawn,” so if you can spot these bodies in the early hours before “the crack of dawn,” you’ll have a better chance of seeing them.

If you’re still not sure how to identify these planets, you’ll get some help this week from the waning crescent Moon.  On the morning of Thursday, October 8, the Moon will be closest to Venus, and will form a line with all these morning planets.  On this day, also look for the Moon near the star Regulus (not shown in the graphic below).

On the morning of Friday, October 9, the Moon will be in conjunction with Mars, though it will also be closest to Jupiter, as seen from North America.  By the time sunrise swings around to the far east, over China, the Moon will have moved into alignment with Jupiter, but it will be daytime over the USA.

If you’re up early on Saturday, October 10, take a look anyway, as the Moon by then will have moved below these planets.  But in the early morning of Sunday, October 11, the “Old Moon” will be aligned with Mercury, very low above the eastern horizon, in gathering twilight.

This will be a very challenging sight, but worth it if you would like to belong to the elite minority of sky observers to spot swift Mercury!  You’ll need a very flat horizon, free of clouds and haze.  Ideally, you’ll want to look out over water, so observers on the Atlantic coast of the Americas and the western shores of the Great Lakes are favored.  Mercury is less than five days short of its greatest western elongation, so this is the ideal time to spot the swift-moving innermost planet of the solar system, lined up with a spooky-looking thin crescent.

It’s said that the great astronomer Mikolaj Kopernik never saw Mercury in his lifetime, and it’s a rare sight for even the most dedicated sky observers, so program your phone or write yourself a note if you want to see this! 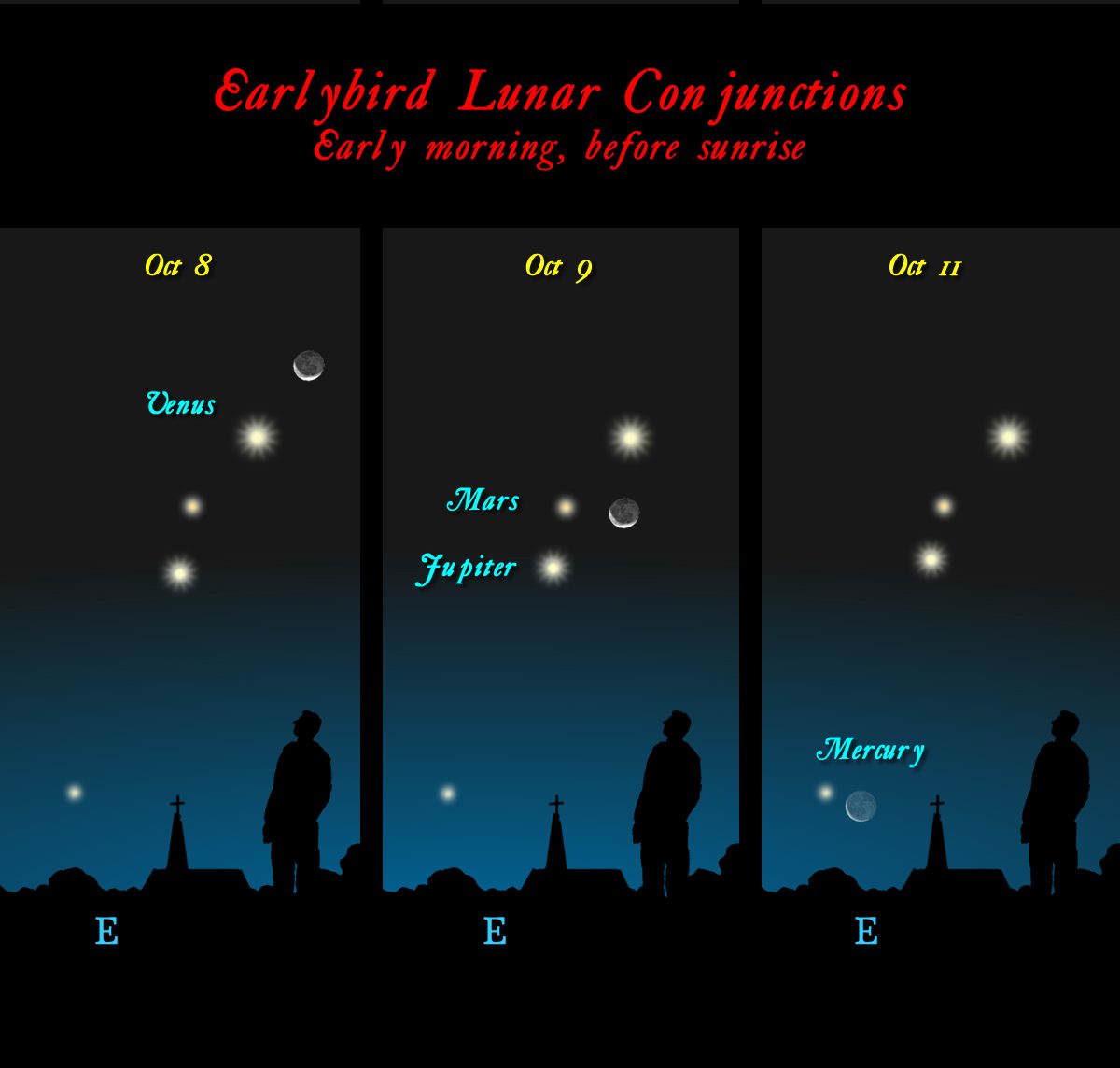 Once you have the Moon to help you spot these planets, keep an eye on them over the month of October, to observe their magnificent planetary dance.  After the conjunction with the Moon, Mars slips to the east at a faster rate than Jupiter, and these two planets line up in a conjunction on the morning of Saturday, October 17.  But if you are up and around each morning before then, walking the dog or milking the cows or whatever, you can notice the subtle changes in the positions of these bodies from day to day.  Start a sky journal and make sketches of what you see, so that you can have a record of the movements of the planets. According to Kepler’s laws of motion, Mars moves faster that Jupiter in its orbit, since it’s closer to the Sun.  But Venus is closer still than either of these planets, and it’s movement through the stars is considerably faster.  By the morning of Sunday, October 25, Mars has dropped down under Jupiter, but Venus has dropped even more.  On this morning, Venus and Jupiter are lined up in a conjunction.

On this day, Venus is at its greatest western elongation, and is therefore at its maximum distance from the rising Sun, so these two will be pretty high above the horizon.  But Venus and Jupiter will be separated by 1.1 degrees, over two lunar diameters, and will not be as close as they were during their conjunction back in June, when they were less than one lunar diameter apart. 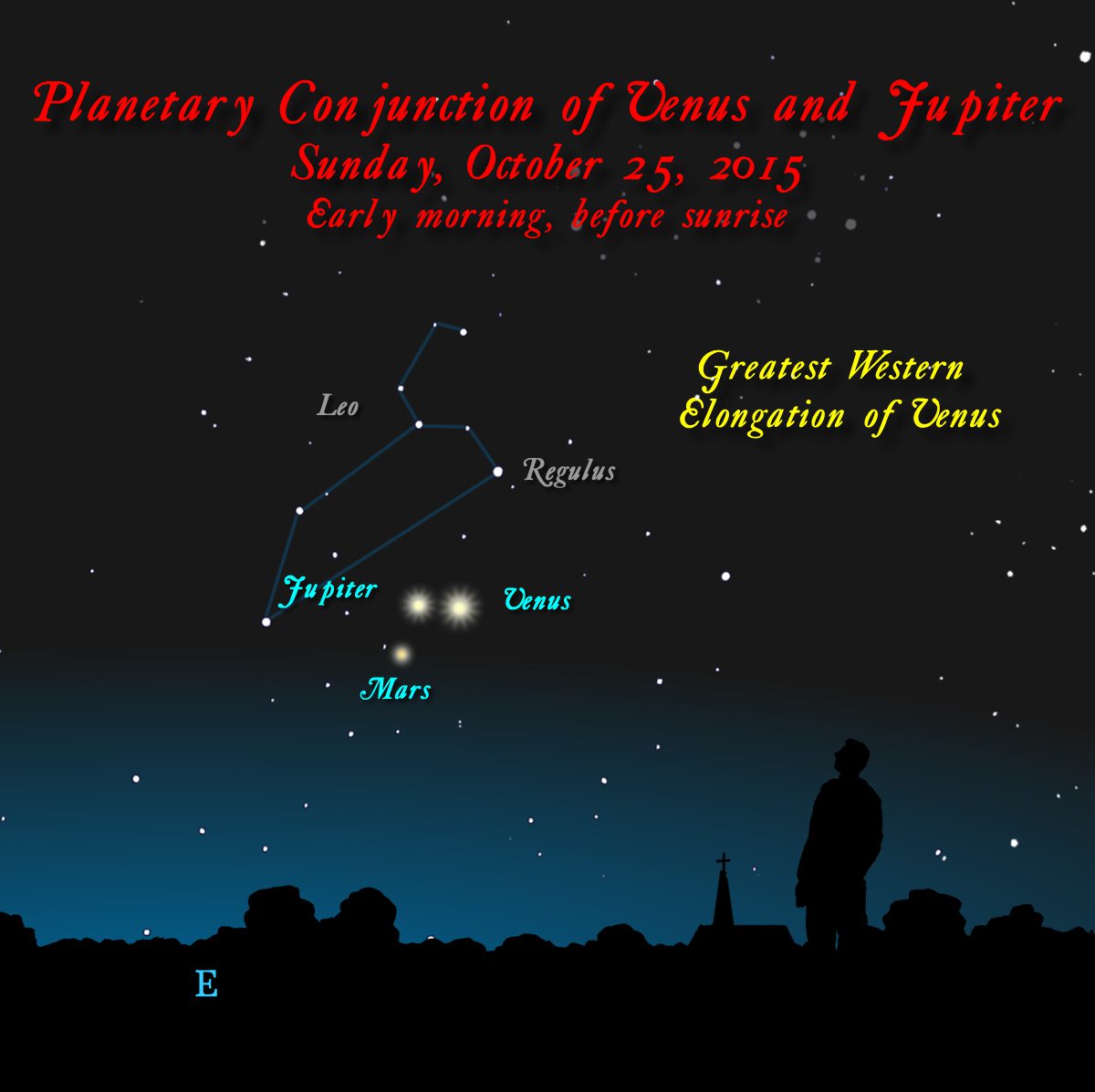 After its maximum elongation, Venus begins to move toward the east, and will steadily draw closer to the sunrise through June, 2016.  The dance continues into November when Venus lines up into a conjunction with Mars on the morning of Tuesday, November 3.  We’ll be keeping an eye on Mars into 2016, as it reaches opposition on May 22, when it is closest to the Earth and therefore brightest. 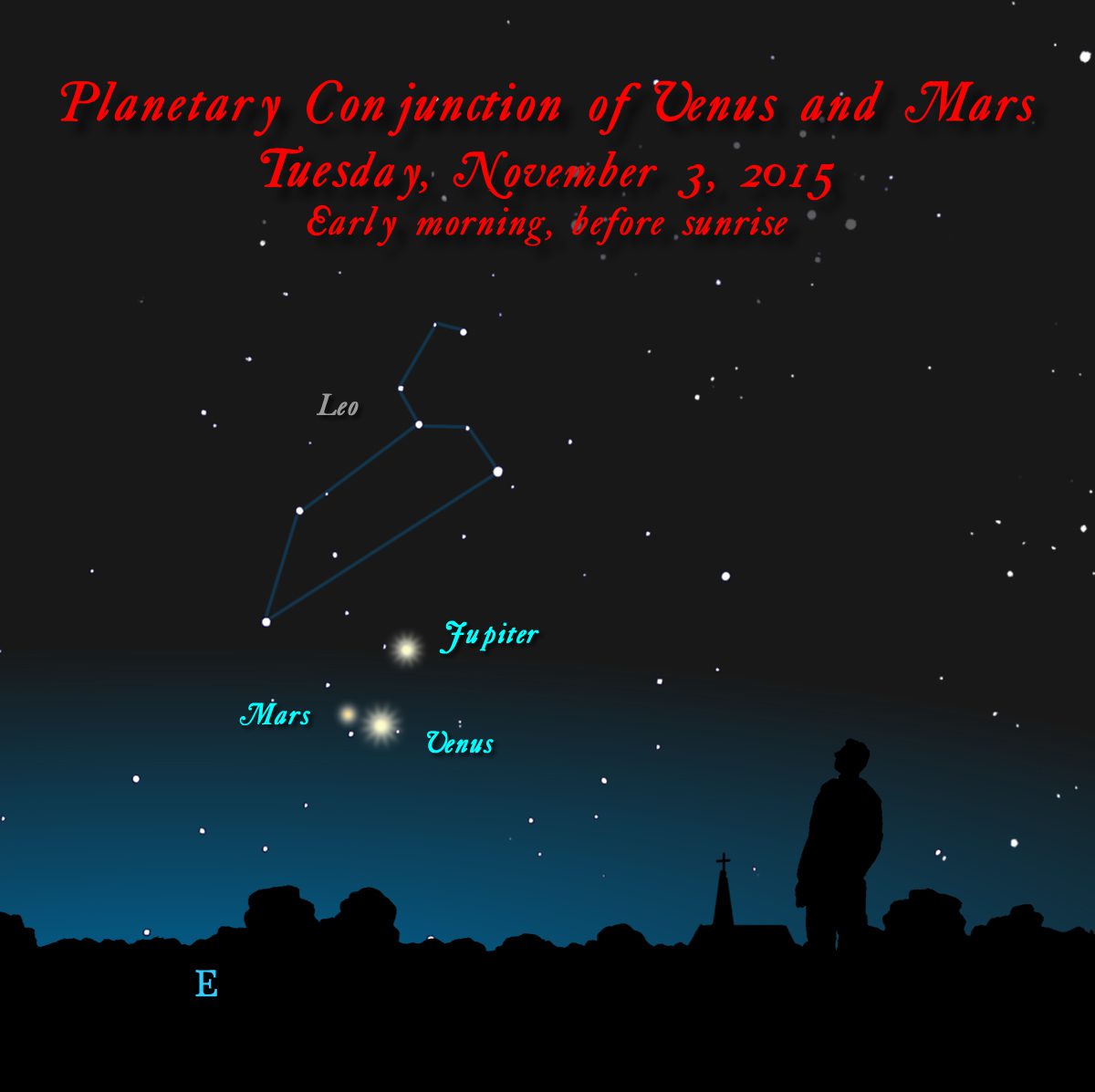 The waning crescent Moon will swing back into the scene in the first week of November.  By then, Venus will be below Mars.  Look for the Moon to line up with Jupiter on the morning of Friday, November 6, and with Venus and Mars on Saturday, November 7. 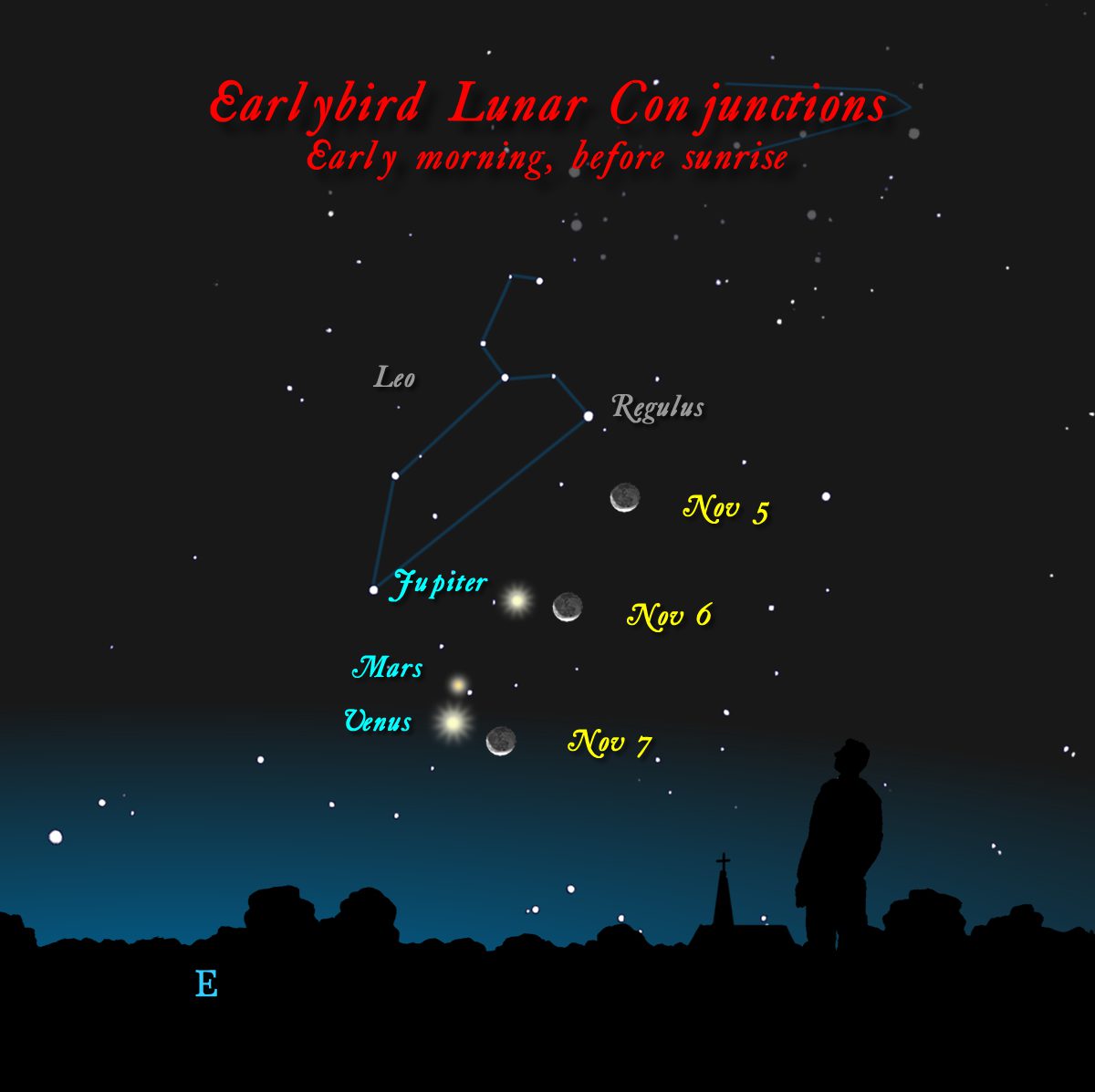 It’s a simple thing to observe the graceful motions of the planets as they swing past each other in the sky.  Most people today are unaware of these motions and alignments, and many more couldn’t care less.  Our culture is enamored with splashy, exciting visuals, like CG special effects in blockbuster movies.  But the planets are a subtle part of the calm beauty of the sky, and can give us a hint of the glories of the Creator’s handiwork, if we can only take a minute to pause from our busy lives and look up.