Friends, if you’ve been following this “tetrad” of total lunar eclipses in 2014 and 2015, this is finally the one you’ve been waiting for!  The other three favored the Pacific, and were best visible from the USA either in the middle of the night or early in the morning, before sunrise.  Of course, the dedicated eclipse watchers adjusted their schedules to look for those eclipses,  but most of America just went to sleep!  But this last total lunar eclipse will occur during the early evening hours shortly after sunset, and will be easy to see for everyone in the USA!

I’ve had many people tell me that they have never seen a lunar eclipse, even including close relatives.  This is sad, since total lunar eclipses are very common, and easily seen, and generally well-reported in the media.  But I regret that even though I have created these newsletters for years, I have inadvertently neglected to verbally inform some people close to me.

Worse than that are the reports I receive of mature adults who adamantly insist that there has never been a lunar eclipse in their lifetimes.  This is simply not true.  I first observed a lunar eclipse in 1982, at the age of 21, and have managed to find out about every other one since.  But then again, there were numerous lunar eclipses before that which I would have loved to see, but somehow never heard about.  In spite of ample media coverage, there are still problems in communicating the news about lunar eclipses.

For these reasons, I encourage everyone to help spread the word about the total lunar eclipse of the evening of Sunday, September 27, 2015.  And more over, plan on sharing this eclipse with someone!  It’s always more fun to observe sky events with others, and this is a perfect occasion for planning your very own Eclipse Party!  Our church is having a Lunar Eclipse Bonfire that night!  Why not yours too?  You can make s’mores with the kids and enjoy a pleasant autumn evening while observing God’s wonder of a lunar eclipse!  Or else invite some friends over to your house!  Whatever you do, if the skies are clear that night, do not miss this eclipse! 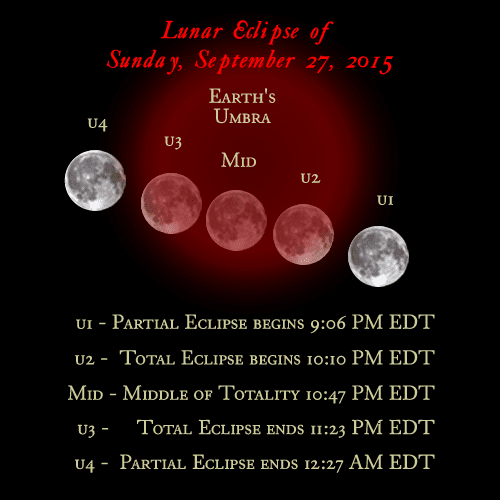 As shown in this graphic, the first stage of partial eclipse begins at 9:06 PM in the eastern time zone.  This is the point of “first contact” with the Earth’s umbra, which is to say, the full shadow of the Earth.  Technically speaking the eclipse event actually begins before this, at the time when the Moon enters the penumbra or partial shadow of the Earth.  But there is really not much to see at this stage, except a subtle dimming of the Moon’s brightness.

First contact (or U1) is the point when the leading edge of the Moon touches the edge of the Earth’s umbra.  The stage of partial eclipse begins since after this moment, a darkened edge becomes visible upon the Moon’s face.  This is also called ingress, since the Moon is entering the umbra.

Second contact (or U2) is the point where the trailing edge of the Moon enters the edge of the umbra.  The stage of total eclipse commences, as the Moon is fully immersed in the Earth’s shadow.

Mid-eclipse (MID) is just that, when the Moon is fully-centered in the Earth’s umbra, the midpoint of totality and of the entire eclipse event.

Third contact (or U3) is when the leading edge of the Moon touches the trailing edge of the umbra.  This marks the end of totality, as the Moon now begins to emerge from the Earth’s shadow.  This begins the egress of the Moon, indicating the outgoing stage of partial eclipse.

Fourth contact (or U4) is the end of partial eclipse, when the trailing edge of the Moon exits the Earth’s umbra.

This handy chart shows the local times of the stages of eclipse for the continental United States:

Those in the central USA are poised to observe the entirety of the partial and total stages of eclipse at the earliest hours after sunset.  Those in the western USA will miss the beginning of the eclipse event, since it will begin while it is still daytime for them, and the Moon is rising in a stage of eclipse.  However, those on the west coast will be able to observe the egress of eclipse at an early hour, while this stage will be seen in the later hours after midnight for those in the eastern USA.

All in all, this eclipse offers the best circumstances to the greatest number of observers in North and South America.  So please circle this date on your calendar, and tell all your friends!
Colors of Eclipse 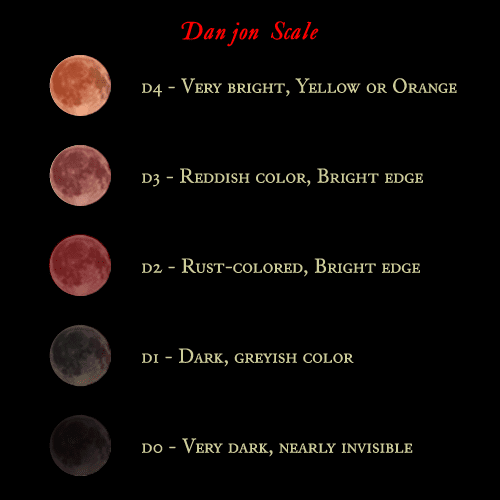 D4 – This is a very bright eclipse.  The Moon appears as a yellowish-orange, and is very bright along the edge of the umbra.  These are kind of disappointing, not really very much like what you’d expect from an eclipse.

D3 – Not as bright or yellow as D4, more of a reddish color, but still comparatively bright as far as lunar eclipses are concerned.

D2 – This is the standard “Blood Moon” color.  The Moon has a deep rusty look, and the brightness is greatly diminished compared to the normal Full Moon.

D1 – The Moon is grey and dusky, with some tinges of red.  It can be hard to pick out the Moon from the sky, especially under light-polluted city skies.

D0 – This is a very dark eclipse, hard to spot under a dark rural sky, nearly invisible, especially at mid-eclipse.

The brightness of a lunar eclipse corresponds to the amount of dirt in the Earth’s atmosphere, since the red color is due to filtering of sunlight through the atmosphere, shining onto the Moon (as explained in a previous newsletter).

I’m expecting that this eclipse will be darker than usual, due to the wildfires in 2015 in Alaska, California and the Pacific Northwest.  I’ve received reports all summer from folks across the USA who report clouds, haze and diminished sky quality due to the smoke from these fires.  Given global air circulation, it follows that the entire atmosphere of the Earth should have a greater-than-normal concentration of aerosol smoke particles, which would scatter more sunlight, resulting in a darker eclipse.  But we’ll all find out next week!

This total lunar eclipse is special for many reasons.  For one thing, it is the fourth total eclipse of the current “tetrad,” and is the last in the “Blood Moon” series.  This newsletter has included a  series of articles informing and educating about this latest “wind of doctrine,” and the final installment follows below.  But one thing certainly is undeniable, and that is that this total lunar eclipse represents a convergence of various lunar cycles.

As a so-called “supermoon,” this Full Moon is very close to perigee, the point in its orbit when it is closest to the Earth.  The proponents of this notion proclaim that the Moon is 30% larger in the sky, and thus correspondingly brighter.  For my own part, I’m not impressed with that.  The Moon is inherently very small in the sky, only about 1/2 of a degree, or about 30 arcminutes.  A 30% increase only represents about 9 arcminutes, a very tiny difference indeed.  Without a “normal” Moon in the sky to compare, I don’t understand how even an experienced lunar observer can make an “eyeball” determination of such a small size difference.

As for being brighter, the brightness of even a regular Full Moon can vary a lot just based on haze or thin clouds in the atmosphere.  Unless one lives in the desert where the air is very dry, I’m not sure how one can even notice the difference.  I think the “supermoon” hype plays on the power of suggestion — if you tell people the Moon is brighter, they’ll believe that it is, and report that accordingly.  But unless one has some sort of scientific equipment for measuring the apparent diameter and the amount of light flux, I’m skeptical than anyone can judge any differences with just the unaided eye.

This is also the “Blood Moon” according to the popular teaching currently making the rounds in Christian circles.  This latest eclipse is occurring during Sukkot, the Jewish feast of tabernacles.  As explained in previous newsletters, Sukkot always occurs on or very near the day of the first Full Moon of autumn.  However, a lunar eclipse also must occur during the Full Moon, and the timing of lunar eclipses rotates through the months in a regular 18 year cycle.  So there is a lunar eclipse during Sukkot about 1/6 of the time.  This is perfectly natural, and not a big deal, just a convergence of the lunar calendar cycle with the eclipse cycle.

It is also the Harvest Moon, or the first Full Moon of fall.  Due to the geometry of the Moon’s path through the sky, it happens that the Moon rises early in the evening in the days following the Full Moon.  This is a providence of the LORD, as it has historically provided farmers with extra hours of light in the early evening for bringing in the harvest.  But the Harvest Moon usually coincides with Sukkot anyway, being the same Full Moon most of the time.  And it is not uncommon for a lunar eclipse to occur during the Harvest Moon, again happening about every six years.

So even though the notion of a “Super Blood Harvest Moon” sounds significant, it’s really not, simply a convergences of various lunar cycles.  In any event, there is no reason to believe that this natural event would herald the imminent return of Jesus!