By classicalastro1 July 1, 2015 September 5, 2015 Alignments of the Planets, Seeing Jupiter in the Sky, Seeing Venus in the Sky 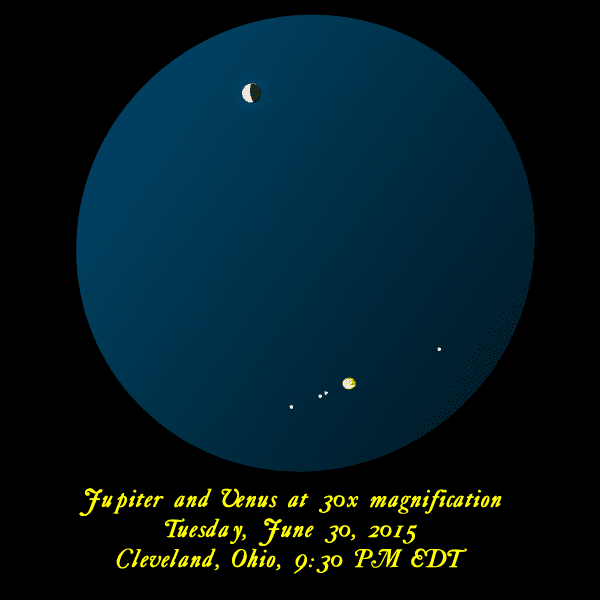 CONJUNCTION REPORT: The weather was a tease all day, with thunderstorms and intermittent showers in between breaks of Sun. I had already committed to setting up my telescope at our church, but had low expectations. But God was gracious and provided everyone a view that we could not have expected.

About 30 people arrived at the church, and a red Moon was visible struggling through hazy clouds as night began to fall. As dusk twilight deepened, Venus fought through the haze, and bright Jupiter was never more than a faint speck next to the Evening Star. I’m sure the view under pristine skies was dazzling, but we were grateful to see anything at all from the misty Cuyahoga Valley. I was quite amazed to see that both planets could be covered by one finger. This was the closest conjunction I’ve seen in 27 years of skywatching.

Though the eyeball view was underwhelming, the view through the scope was actually quite nice. We didn’t get any photos, but this illustration is my idealized rendition of what we saw. Venus was a bright crescent, maybe about an 80 degree phase angle, and the ashen light was readily visible on the dark side. Jupiter was conspicuously much fainter than Venus, but the belts were visible with a lot of yellow color. In early twilight, no moons were visible, but they popped out as the dusk darkened.

At times, the sky was so hazy that the planets could not be seen visually, but my 10″ f/5 Dobsonian scope was able to collect enough light so that we could still see them. The seeing was terrible, the sky was boiling like mad, but a moment of steady viewing would pop in every so often, so our patience was rewarded.

We stayed with the planets until they sank into the trees. It was an unexpected blessing. I know that a lot of people around the USA had rain and clouds, and I’m very sorry for anyone who was disappointed. I feel your pain! One thing I’ve learned from 27 years of astronomy is “the LORD giveth and the LORD taketh away, blessed be the name of the LORD.” I’ve seen some amazing stuff over the years, including two transits of Venus, and I’ve missed some stuff. Grateful this morning to have the June, 2015 close conjunction of Jupiter and Venus among the sights to have seen, especially for the sake of the faithful folks who came out to learn and experience.

If I can encourage everyone who saw this or missed it, keep your eyes on Jupiter and Venus throughout July. This pair will remain in an extended alignment all month, as they descend into the sunset. So you’ll have several more weeks to see them together, even though the closest pass will be over. And in general, there are other sky events ahead, and always little things to see in the sky. So please take to the time to make friends with the stars and planets, and experience God’s free show in the sky! -jay