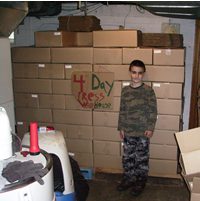 The Fourth Day Press warehouse with the Warehouse Manager

Fourth Day Press is a home business of the Ryan Family, a homeschool family in Cleveland, Ohio. Though we’ve had an online store called “Fourth Day Press” on and off since 2003, we only commenced actual publishing in 2007.

A lot of astronomy books are primarily text-based and only use illustration lightly, mainly for ornamental purposes. However, the sky is only understood visually, and typical astronomy books are not very helpful to the reader to finding their way around the sky.

Our goal at Fourth Day Press is to create user-friendly astronomy books and curricula that present the visual appearances of the sky in a visual medium, relying heavily on illustrations that depict the actual scenes that a reader might expect to see.

We seek to promote Classical Astronomy, the traditional approach to understanding the sky, as it had been understood from ancient times through the period of the American Almanacks, until about the mid-19th century. The popular media today is full of Modern Astronomy, featuring black holes, big bangs and related topics. Instead, we hope to restore an historical understanding of the forgotten sky, as can be seen from our own backyards. Our readers will be surprised at how much there is to know!

About the Ryan Family 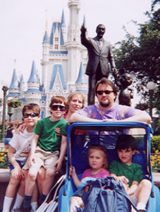 We’re the Ryan Family from Cleveland, Ohio. We’ve been homeschooling our kids since they were babies. We follow the classical approach to homeschooling, and are very “eclectic” in our selection of curricula.

If you think about it, nearly all parents start out as homeschool parents. Most Moms and Dads teach their children their ABCs, colors, how to count, and other such things. However, many parents who “go with the flow” send their five-year-old kids off to school, and thereafter delegate their children’s education to someone else. But just as it is a joy and a blessing to see a young child learn to read and count at home, even greater joys await homeschool parents as older kids learn Algebra, Latin or other increasingly complex ideas at home!

The Ryan Family enjoys learning about God’s beautiful world and so science is a popular subject in our house. We love hiking through the lush woodlands of the excellent Cleveland Metroparks system. We enjoy the creek gorges and other glacial formations prevalent throughout Northern Ohio. We are members of the historic Cleveland Zoo, and make several trips to the zoo each year. And in warm summer evenings, we enjoy watching the Sun set over Lake Erie.