Most of the time, this newsletter provides information for observing the classical planets. For whatever reason, these planets are largely unknown in our generation. There is a misconception that the planets can only be seen through a telescope and are invisible with the unaided eye. This is completely untrue. The fact is, the planets are among the brightest “stars” that can be seen in the night sky.

In fact, Venus and Jupiter are dazzlingly bright, the third and fourth brightest objects in the sky after the Sun and Moon. It’s a mystery that these planets are not famous in our generation since they are visible nearly every clear night.

While somewhat faint most of the time, every two years Mars brightens enough to rival Jupiter. Saturn is less dazzling but comparable in brightness to the brightest stars. Mercury is very elusive, not as bright and usually only inconspicuously visible near the horizon during twilight. Mercury can pose a challenge for even experienced skywatchers, especially in misty northern climates.

These classical planets have been known since ancient times, millennia before the invention of the telescope. People today are often excited to learn to identify the planets, amazed that a certain bright “star” is actually another world in our solar system, and not an airplane or a UFO. Some people refuse to believe that the bright object really is a planet, persisting in the common misconception.

The planets are different than the “fixed stars” in that they move around through the constellations over a period of time. The movement of the slower planets is only apparent over months and years, but the motion of the faster planets can be seen over weeks or even days. The problem is that the constellations themselves are not very well known in today’s generation. Most people don’t take the time to look up, and if they do, they don’t know what to look for. This is no one’s fault, it’s just the “spirit of the age” in which we are currently living.

Though the identities of the planets were well known throughout all history, this common knowledge became lost sometime in the 20th century, for reasons that cannot be readily explained. This is one of the goals of Classical Astronomy, to restore an awareness and understanding of the ordinary, commonplace glories that the LORD has placed over our heads every night of our lives.

Venus is currently the “Evening Star” and is seen dazzling in the western sky at dusk twilight after sunset. You really can’t miss Venus since it is over 15 times brighter than even the brightest fixed star. Just look in the general direction of where the Sun has gone down as night falls. Venus is very bright in the night sky after twilight ends.

At the present time, the constellation Gemini is currently advancing toward the sunset with the seasonal progression of the stars. Gemini is mainly a winter constellation, high above the famous constellation Orion, which dominates the winter sky. Gemini is easy to spot in the sky by the “twin stars” Castor & Pollux, a conspicuous sight.

As the Earth revolves in its orbit, the changing the line of sight between the Sun and the background stars creates the illusion of the Sun moving through the constellations. This appears in the sky as a steady movement of the constellations to the west, which then disappear into the sunset. (For a complete illustrated explanation of this phenomenon, check out our Signs & Seasons curriculum.)

So anyway, Venus is also orbiting the Sun and in the current season, appears to be steadily drawing away from the Sun. Venus is thus moving increasingly far away from the place of the sunset. Due to the combination of these appearances, it seems that Venus is holding a roughly steady position above the sunset horizon, and that the stars Castor & Pollux are currently moving toward Venus.

Go out tonight or any clear night this weekend. On the evening of Sunday, May 27, Venus appears to be somewhat below Castor & Pollux in the western sky as night falls. Also note the bright stars Procyon and Capella somewhat distant on either side of Venus. These are winter stars that will soon vanish into the dusk twilight, a sure sign in the sky that winter has ended and that summer is coming soon. 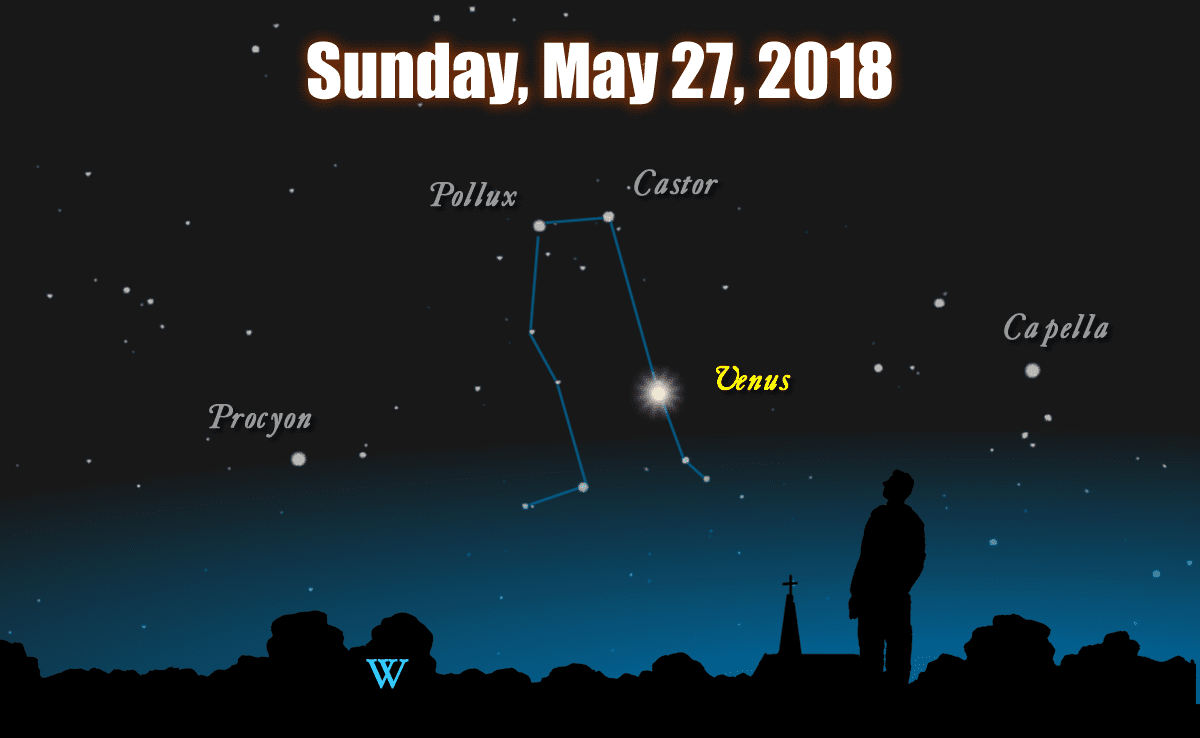 Keep your eyes on Venus and Gemini each clear evening over the next week. It should be clear over a span of nights that Castor & Pollux are moving closer to Venus, and that Procyon and Capella are dropping closer to the dusk twilight horizon. By next Saturday, June 2, the distance between Venus and these stars should appear considerably closer. 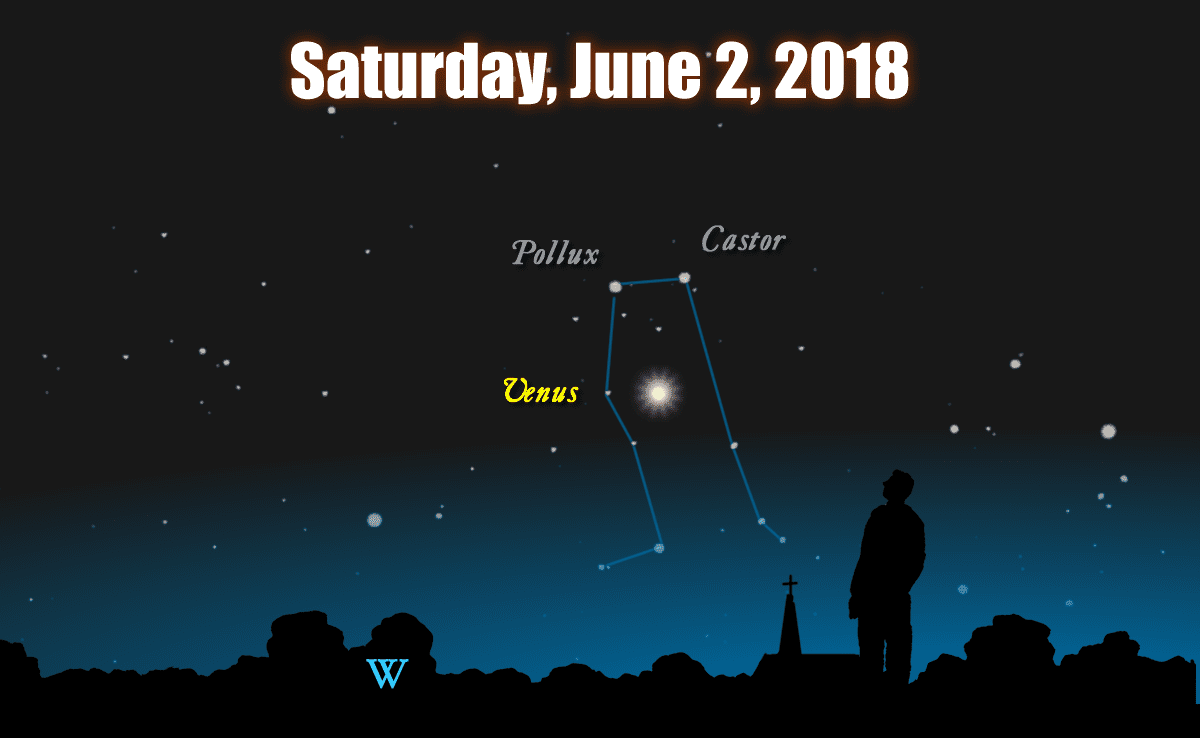 Watch the evening sky over the first week to see Venus draw into alignment with Castor & Pollux. On the night of Friday, June 8, Venus will be in conjunction with Pollux. Over the following nights, Venus will form a straight line with these stars. By this time, Procyon and Capella will be very low to the horizon, and may disappear from sight. After that, Castor & Pollux will themselves drop below Venus, and will soon vanish into the twilight. 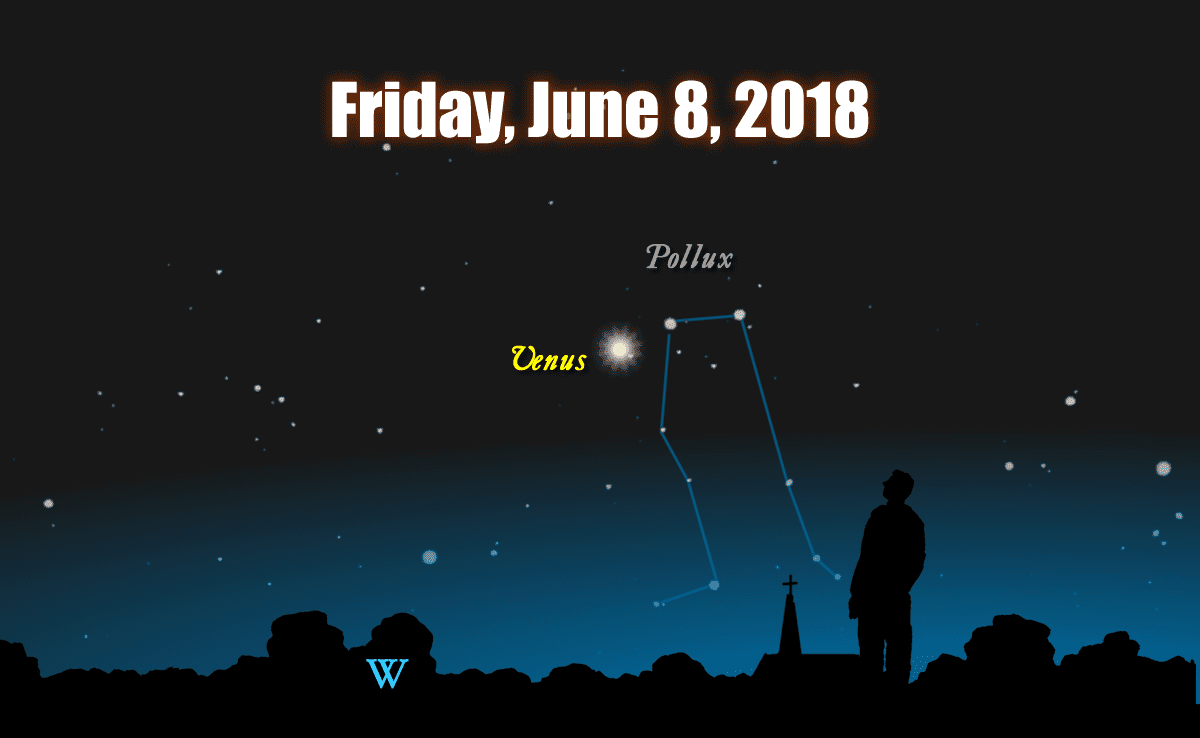 Gemini is the location in the sky of the summer solstice. When the Sun reaches the exact point on June 21, it is the longest day of the year, the first day of summer over the northern hemisphere. By watching Castor & Pollux passing Venus and advancing toward the sunset, we can observe from the sky that spring is drawing to a close and that the beginning of summer is at hand.

For me, following the cycles of the planets is a fun activity, and just another way to enjoy being outside. The sky is part of our outdoor environment and it can enrich our lives to become acquainted with the stars and planets, and learn to follow the cycles of all the celestial bodies. This was done for centuries by our ancestors, in an era when people lived closer to the natural world, rather than indoors in an artificial environment as we do today.

Also this weekend, be sure to turn around and look to the east at the other end of the sky. The waxing gibbous Moon will approach and then pass the bright planet Jupiter. In 2018, Jupiter is passing through the stars of the constellation Libra, just to the east of the constellation Virgo and its bright star Spica. Each night, the Moon appears further to the east than the previous night. After passing Spica, the Moon approaches Jupiter on the night of Saturday, May 26, and is then found to the east of Jupiter on the evening of Sunday, May 27. 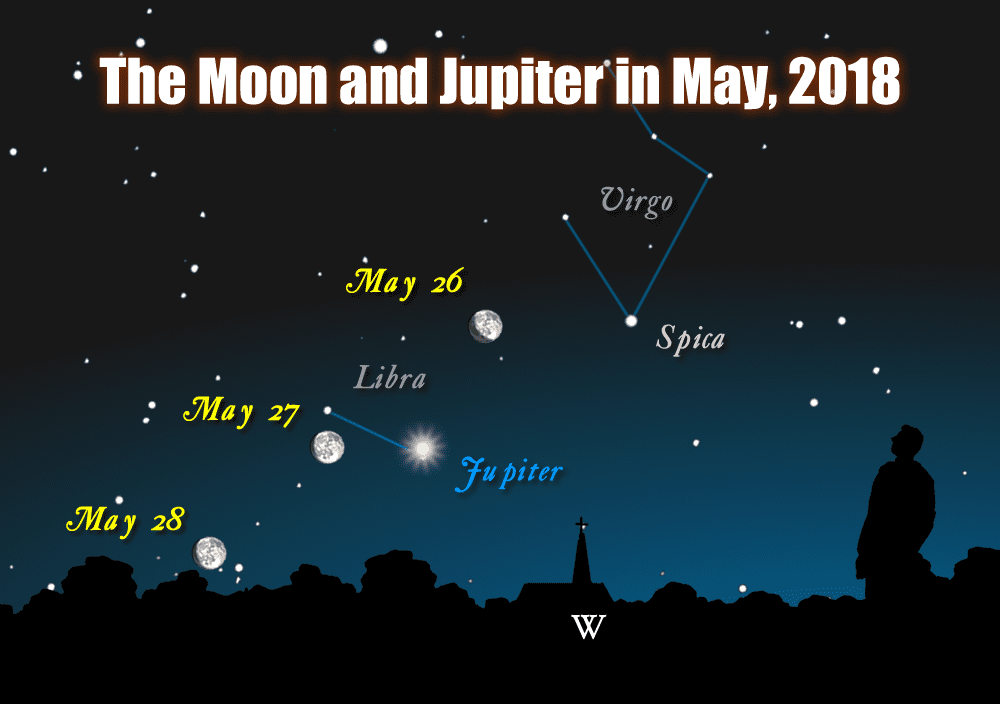 If you happen to be up late at night or early in the morning, check out the planets Mars and Saturn that rise late, after Jupiter. In 2018, Saturn is passing through the constellation Sagittarius, which is the place in the sky of the winter solstice. You can’t miss Sagittarius since it looks like a teapot! After the Full Moon of Tuesday, May 29, the waning gibbous Moon will pass close to Saturn on the night of Thursday, May 31 into the morning of Friday, June 1.

Two mornings later, on Sunday, June 3, the waning Moon will pass Mars, currently moving through the stars of Capricornus. Mars is conspicuous for its distinct reddish-orange color, like a shiny new penny. Mars does not rise until after midnight, so you can best observe the alignment of the Moon and Mars in the morning before sunrise. 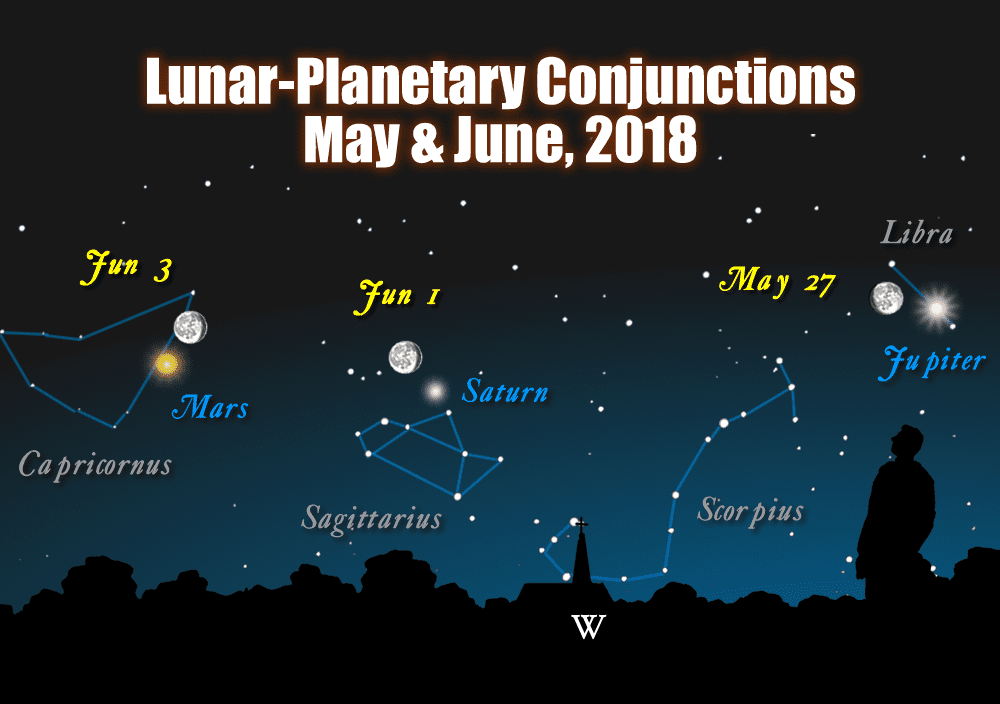 We’ll hopefully be back soon to tell you all about the current season of Mars. The Red Planet will reach opposition on July 27, and will then be at its brightest since it will be closest to the Earth. In 2018, Mars will have its closest opposition since 2003, when it made its closest approach to Earth in all human history. So this year Mars will be brighter than Jupiter, a very uncommon occurrence indeed!

Jupiter and Saturn are currently drawing closer together. Since Jupiter moves faster through the constellations, it overtakes Saturn every 20 years. This is a very rare planetary conjunction of Jupiter and Saturn, and will occur sometime in 2020. This will be a very close alignment, and Jupiter and Saturn might be visible in the same telescope field of view. Unfortunately, this alignment will be very close to the Sun, and will be low in the sky, mostly swallowed by the dusk twilight.

There will be another conjunction of Jupiter and Saturn in the year 2040, for those who might still be around. That alignment will also occur very close to the Sun. But for anyone who can last until April 3, 2060, there will be a fantastic alignment of Jupiter, Saturn and Venus with the waxing crescent Moon. Our grandchildren can expect to enjoy a rare and beautiful conjunction on that evening 42 years from now.