Home » Seasonal Constellations » The Design of the Sky – Orion’s Belt

In speaking of the constellations, you hear people say all the time, “I don’t know how anyone is supposed to see those pictures in the stars. I don’t see anything like that.” It is true that a lot of the so-called constellations require quite a stretch of the imagination. However, a great number of the brightest and most famous constellations are formed of shapes that are actually quite familiar, and do resemble the figures that they purport to represent.

Mind you, even the best constellations are not detailed artwork renderings of the objects, but they certainly are fair “stick figure” drawings of the shapes they purport to represent. There are 88 recognized constellations on the entire celestial sphere. Of these, 48 were known to the ancient Greeks. The others were added in modern times, and many are simply “crack filler” shapes formed of faint stars, not especially obvious, devised by experienced astronomers, simply to denote blank portions of the sky.

However, you would not realize all that from typical star maps, which show all the constellations with equal weight, as if they were all equally visible. Such maps also show convoluted “connect the dot” patterns between bright stars and faint stars, with no distinction. These are among the reasons why many people are confused and disillusioned after trying to learn the constellations. Another reason is that it requires dedicated, persistent effort to learn the sky, an investment that few people are willing to make.

Our Signs & Seasons curriculum features 35 constellations, most of which are easily visible from everywhere in North America, including light-polluted neighborhoods like mine. It’s worth the effort to learn the sky for many reasons, practical and aesthetic. But there’s one special reason that all Christians should appreciate… the constellations actually do reveal evidence of design, as if an intelligent Creator had placed them there deliberately, as they appear.

Psalm 19 says that the heavens declare the glory of God, and the firmament showeth his handiwork. Psalm 8 says that the stars are the work of his fingers. This need not be construed as just a colorful metaphor, and we can discover this handiwork for ourselves if only we will invest the effort in learning the constellations.

From my experience, I count a good 10 constellations that really do look like the familiar objects they purport to represent: The Big Dipper, Cassiopeia, Orion, Taurus, Canis Major, Leo, Scorpius, Sagittarius, Cygnus and Delphinus. It would be a very long article to discuss all these in one piece, so we’ll only discuss the winter constellations for now, those stars currently visible in the evening sky in the current season. We’ll try to mention the others as the seasons progress.

We are told from secular science that the magnificent order we observe in the natural realm has come about by accident, that all this wonder is a product of random chance. Following that line of thinking, the placement of the stars in the sky should be purely random. However, of the 100 brightest stars visible in the sky to the human eye, stars of first and second magnitude, a great number of them form the basic patterns of the 10 constellations listed above.

I wonder what would be the statistical odds of so many familiar shapes forming themselves at random from only 100 stars? If you were to take 100 ping pong balls and throw them out onto your living room rug, what would be the odds of those balls arranging themselves into a dipper, a man, a lion, a scorpion, etc. etc.? Then consider that the stars are not arranged on a flat rug, but in a three-dimensional volume surrounding the solar system, each star at various distances away, some closer and some farther, some brighter and others more faint, but positioned just right to appear of sufficient brightness to define the shapes we see of the constellations.

Honestly, I don’t know what those odds must be, I’m no statistician, but those odds strike me as being… well, astronomical!  Then consider that mainstream science teaches that all the stars are in motion, circling the center of the galaxy, and the current solar neighborhood represents the stars that are “just passing through” at this particular moment in human history, according to the alleged billions of years of the universe. The arrangement of the constellations is just too perfect to be an accident, right here and now, at this particular time, to form recognizable shapes.

Understand that this is strictly an aesthetic argument, and is not scientific. There’s bound to be some sort of science of pattern recognition, some psycho-babbling rationale of why people see shapes in places like clouds and rocks, in addition to stars. Perhaps some would argue that it would not really be all that unlikely to see such patterns in the stars. I would expect that the typical secular evolutionist would dismiss this contention, as they dismiss all other apparent coincidences. But let’s consider the remarkable providence of just the winter constellations.

Take Orion, for example. Can anyone deny that a figure of a man is formed by these stars? It’s clear to see an upper and lower body, well proportioned, defined by some of the brightest stars in the sky, and separated by the famous Belt. The Belt just so happens to lie closely along the celestial equator, the midpoint between the celestial poles, a very useful position, which insures that Orion is the only constellation visible from every single location on the Earth. Is all this still another set of coincidences? 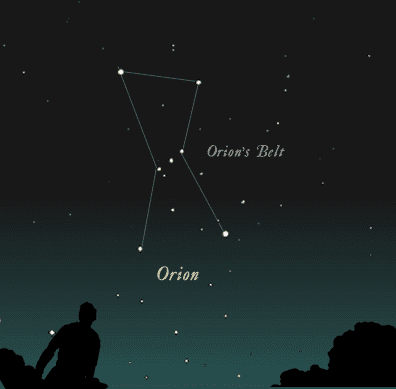 Just about every culture in the world has some star lore that involved Orion. The Bible mentions him three times, calling him by the Hebrew word kesil, which means “fool.” I don’t know why Scripture calls Orion a fool, but he is surely a fool well placed for every eye to see.

As if Orion himself is not enough of a wonder, consider that he is facing off against Taurus, a triangle of stars that forms the distinct shape of the head of a bull. In this way, this scene appears to depict an ancient epic battle of man and beast. Ever been around a raging bull? I personally would not want to confront such a monster! Amazingly, Orion’s complete pattern even includes raised arms, formed of very faint stars, which give the appearance of the Hunter holding a shield and a club, poised to strike at the Bull. 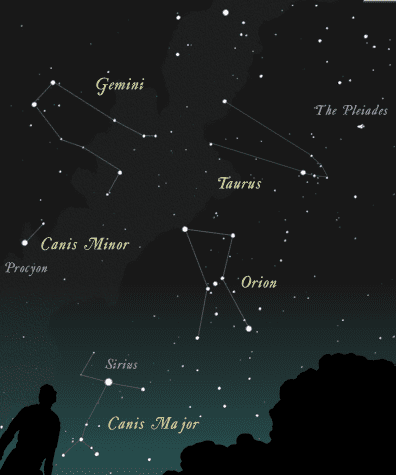 The scene is joined by the Big Dog, Canis Major, in which the legs of the dog are well enough defined to be recognizable as this type of animal. The Little Dog, Canis Major, is not much of a pattern, and Gemini does not appear very much like twins. But I hope everyone can agree that the battle of Orion and Taurus is easy to identify. In my opinion, people take Orion for granted, including astronomers, since it seems very unlikely to me that such a clear arrangement of stars could be the product of random forces in a blind, purposeless universe.

Consider the unlikelihood of Orion’s Belt. These three stars are of second magnitude, among the top 100 brightest stars visible from the Earth. Yet these lie nearly perfectly spaced, in a very even row. 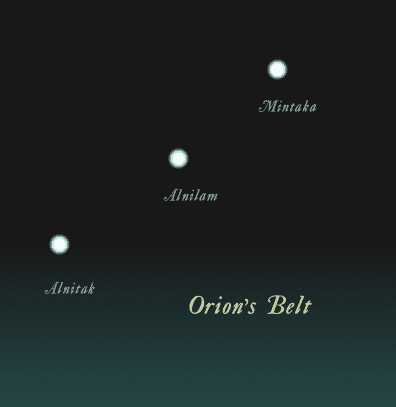 The stars of Orion’s Belt are known today by their Arabian names, Alnitak, Alnilam and Mintaka. These stars are very conspicuously blue in color, appearing nearly identical in brightness. According to mainstream secular science, Alnitak is 736 light years from Earth. However, it’s neighbor Alnilam is 1340 light years away, nearly double the distance. Mintaka is in between the two at 915 light years. Though these stars have different sizes and inherent brightnesses, they all lie within the same line of sight to appear as celestial identical triplets, lying along a very straight line. Coincidence? In my opinion, I see the hand of the Creator in this unlikely alignment.

It gets better. These three stars of Orion’s Belt span an angular distance in the sky of only 2.736 degrees. Out of the 100 brightest stars that cover the entire sky, here are these three that span a tiny separation of less than six lunar diameters. Over 120 Orion’s Belts would be required to encircle the entire celestial sphere.

Amazingly, the separations between these stars are almost perfectly spaced. The angular distance between Alnitak and Alnilam is 1.356 degrees, while the separation between Alnilam and Mintaka is 1.386 degrees. The different in these spans is ONLY 1.782 arcminutes, which is about 1/16 the apparent diameter of a Full Moon. This is only a 2% difference in their respective distances, impossible to see with the eye.

I was flabbergasted to calculate these numbers, at how such precision goes against the notion that these stars could be the result of random chance. However, it is clear from looking at Orion’s Belt that the stars do not lie in a perfectly straight line. Nonetheless, that line is actually pretty straight! If you draw a line from Alnitak to Alnilam, and another line from Alnitak to Mintaka, the angle between these lines is only 3.81 degrees. This works out to be only a 1% arc of a circle, about half of the width of a single minute on a clock face. Look at a protractor to get a sense of the size of an angle of less than 4 degrees.

For my own part, these sorts of facts give evidence that the stars are not just in a random arrangement in the sky, but suggest that, for whatever reason, it pleased the Creator to place them in such a manner that we might see His handiwork above our heads. For my part, this bolsters my faith in God. How about you? Why not make it point on your own to learn the constellations, and discover this evidence for yourself?